Recently, I came across and fell in love with the idea of using XCode 4 snippets. Up until I read the post, I had heard they existed, but never really tried them. After reading the post, I began using his snippets as well as started creating my own. Now, I would say that my work-flow is faster than ever.

Here is a quick demonstration of the power of snippets

As you can see, with 3 keystrokes, I now have a fully working table view implementation with sample data.

This article will be another introduction to XCode 4 snippets but focusing on how to set them up as well as share them with your team.

Adding A Snippet Inside Of XCode

In my opinion, this is not very obvious. The snippet library is fairly well hidden. To bring it up, first ensure that the right side bar is visible in XCode by selecting the right most option of the “view” pane in the top right corner of XCode.

Now that the right bar is available, click on the “{}” option of the bottom most pane. This will bring up the snippet library. 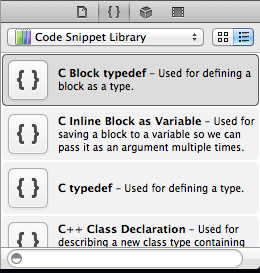 Feel free to browse the snippets that XCode ships with, however most of them are not very useful. So, now this is where I feel Apple engineers were a little too clever. It took me a little while to figure out how to actually add a new snippet. You would expect some sort of + button or something. The way you add a new snippet in this case is to write out a chunk of code and drag it into the Code Snippet Library window.

Once you drag the code into the library, it creates a default snippet called “My Code Snippet”. Which again, is just terribly non-obvious. Now, double click on “My Code Snippet”, and then click the “edit” button to modify it. 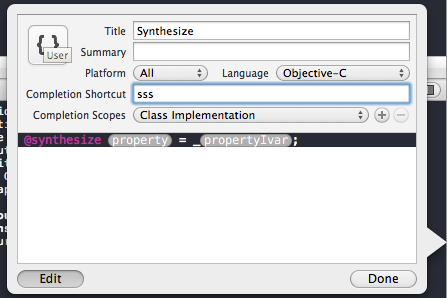 Let’s talk about each of the important fields:

If you notice, many of Apple’s auto generated classes or snippets (like UIAlertView), have these “code bubbles” hinting at the type of data you should put into them. They are also nice because they allow you to tab between them enabling you to implement the code quicker. To add your own simply insert this into your code:

Where “Text” is whatever you want the code bubble to say.

That’s it, when you are finished click done and you should now be able to use your snippets.

While XCode doesn’t have an export button for snippets, they are in a fairly predictable location. They are located at:

That being said, you could manually share them between developers (zip them up and email) OR you could version control this folder with something like git. I really like the latter approach. Any time a developer adds a new snippet to the library, the others just have to pull, restart XCode, and voila the snippet is there.

The only issue now is remembering to actually use your snippets in practice. It takes some getting used to, but I’m sure you will get it. Below, you can download a zip file containing many of the snippets that I use. Simply unzip it into the folder that I mentioned above.