What do I mean by this? Well, I am essentially talking about multithreading your application. If you don’t know what is meant by multithreading, I suggest you and return to this post OR don’t worry about it because you don’t need much threading knowledge for this tutorial. Let’s dig in and I’ll give you an example of the problem.

When you create an application, the iPhone spawns a new process containing the main thread of your application. All of interface components are run inside of this thread (table views, tab bars, alerts, etc…). At some point in your application, you will want to populate these views with data. This data can be retrieved from the disk, the web, a database, etc… The problem is: How do you efficiently load this data into your interface while still allowing the user to have control of the application.

Many applications in the store simply ‘freeze’ while their application data is being loaded. This could be anywhere from a tenth of a second to much longer. Even the smallest amount of time is noticeable to the user.

Now, don’t get me wrong, I am not talking about applications that display a loading message on the screen while the data populates. In most cases, this is acceptable, but can not be done effectively unless the data is loaded in another thread besides the main one.

Here is a look at the application we will be creating today: 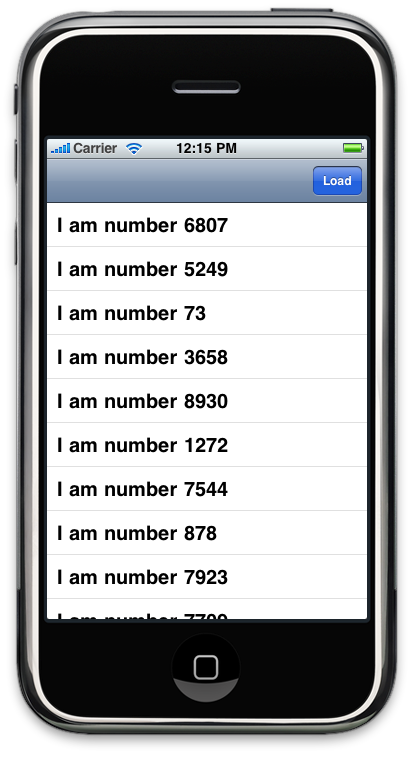 Let’s take a look at the incorrect way to load data into a UITableView from data loaded from the web. The example below reads a plist file from icodeblog.com containing 10,000 entries and populates a UITableView with those entries. This happens when the user presses the “Load” button.

Wrong (download this code here to see for yourself)

“Looks good to me”, you may say. But that is incorrect. If you run the code above, pressing the “Load” button will result in the interface ‘freezing’ while the data is being retrieved from the web. During that time, the user is unable to scroll or do anything since the main thread is off downloading data.

Before I show you the solution, I though I would bring you up to speed on NSOperation.

The NSOperation and NSOperationQueue classes alleviate much of the pain of multi-threading, allowing you to simply define your tasks, set any dependencies that exist, and fire them off. Each task, or operation, is represented by an instance of an NSOperation class; the NSOperationQueue class takes care of starting the operations, ensuring that they are run in the appropriate order, and accounting for any priorities that have been set.

The way it works is, you create a new NSOperationQueue and add NSOperations to it. The NSOperationQueue creates a new thread for each operation and runs them in the order they are added (or a specified order (advanced)). It takes care of all of the autorelease pools and other garbage that gets confusing when doing multithreading and greatly simplifies the process.

Here is the process for using the NSOperationQueue.

Here is an example of how to execute an NSInvocationOperation:

This will call the method “methodToCall” passing in the object “objectToPassToMethod” in a separate thread. Let’s see how this can be added to our code above to make it run smoother.

Here we still have a method being fired when the user presses the “Load” button, but instead of fetching the data, this method fires off an NSOperation to fetch the data. Check out the updated code.

As you can see, we haven’t added much code here, but we have GREATLY improved the overall user experience. So, what did I do exactly?

One thing to note here is we never actually tell the operation to run. This is handled automatically in the queue. The queue will figure out the optimal time run the operation and do it for you.

Now that you have your downloading and processing in a separate thread, you are now free to add things such as a loading view.

I will be expanding on this tutorial in the coming week and showing you how to cache data and display old data to the user while the new is loading. This is a popular technique used in many Twitter and News applications.